How To Wire It

There seems to be some controversy in switch terminology on a single on/off switch and how it's referred too. Some people call them 2-way and some call them SPST or toggle switch. SPST stands for "single-pole-single-throw" which means the switch has 1 common (single-pole) and 1 out (single-throw). Now on this site, I will be referring to switches as 2-way, 3-way etc..

The switch terminology reflects on how each type of switch functions. A 2-way switch simply means you are controlling 1 wire in & 1 wire out, SPST (single-pole-single-throw).<br>

A 4-way switch is 2 wires in & 2 wires out or DPDT. You guessed it (double-pole-double-throw).

Let's look at the diagram below: 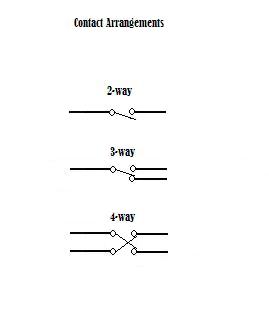 It clearly shows how these combination of switches operate. The common is usually referred to as the contact that always has one end of the switch attached. In this case it is the contacts on the left side of the switches. When the switch is toggled, the opposing contacts are connected or disconnected which opens and closes the circuit.