How To Wire It

To wire a ceiling fan we first have to know the options available on the fan. Most common fans either come with a light or without a light. Although you can get just a ceiling fan most units offer a light kit that can be added in the future. I will be going over the circuits required for all of the options mentioned.

Let's keep in mind that my site is about the wiring aspect only. As far as getting your ceiling fan installed, Please follow the manufacturers manuals and safety guidelines for proper mounting due to weight and other variables which can be an important factor.

More often than not, you're going to have a ceiling light fixture at the location you are planning on installing a ceiling fan. If this is the case, then odds are that this old ceiling light only has enough wires to switch off & on the fan and not the light. If so then a new wire must be ran to control the light as well. So instead of a 3-wire cable going to the fan, it must be replaced with a 4-wire cable. When taking down your old fixture you will be able to see if you have the correct cabling.

If you are installing a fan where there is no previous fixture, then you'll be running a new circuit to the fan and can accommodate for the light as well.

Although I will be going through these circuits on this page in some detail, I recommend you checkout my other pages that cover 2-way switches and 3-way switches. These pages can help you to determine how your circuits are wired or possibly help you decide how you want them wired especially if you are running a new circuit. Keep in mind that I refer to a load in those circuits which means a light, ceiling fan, outlet, etc..

These diagrams to follow are based on the ceiling fan wires having a color code of:

Some manufacturers may use different color codes so be sure to follow the instructions that come with your particular product.

Here's a list of different scenario's to choose from:

No Switches Controlling the fan. You turn on/off the light & fan from the ceiling fan controls: 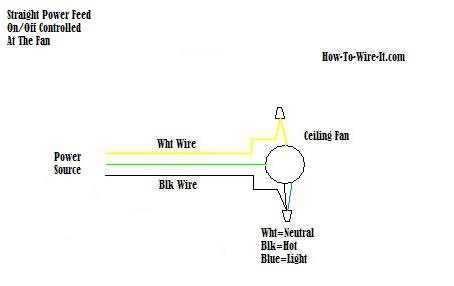 This is assuming that you are installing a ceiling fan in a location that had no fixture there before. This would be a new circuit ran to the ceiling fan.

A single 2-way switch turns on/off both light & fan. (this one is fairly common. Using the switch to control the light then turning on/off the fan from the fan itself). 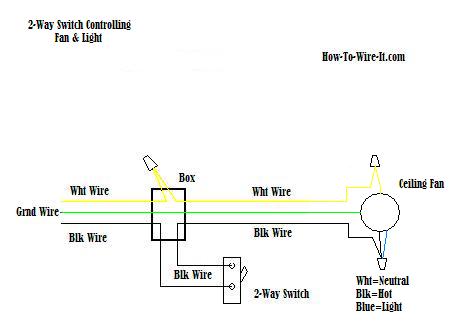 This diagram is for those who are replacing a light fixture with a ceiling fan. Your existing light fixture was controlled by a switch and only one switch. Chances are, you only have a 3-wire cable ran to the fixture so you would be limited to powering the ceiling fan & light both. Typically using the switch for the light and turning the fan on/off by the fan switch on the unit. Of course this is all based on not replacing the existing wiring that you currently have. 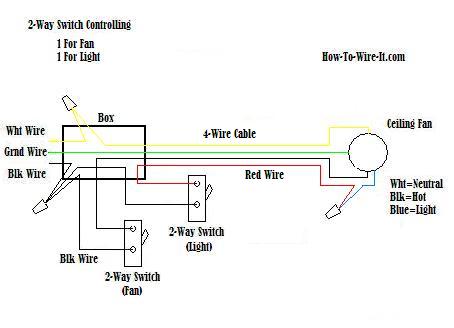 Now for the good one. This one is the same as above but an additional switch so you can turn on/off the light from 2 different locations. The fan is still operated from one location. The 2-way switches for the light will now change to 3-way switches. 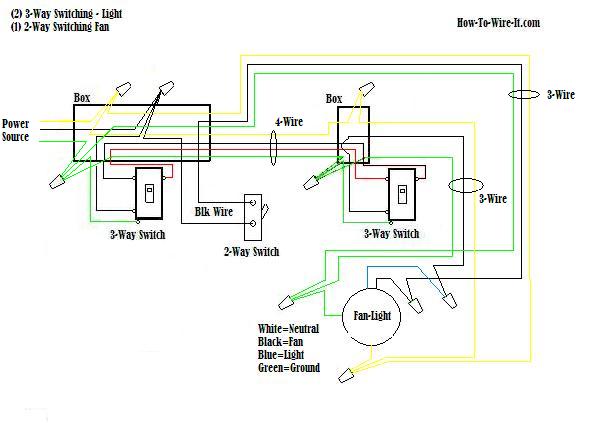